HAS THE PANDEMIC INDUCED A NEW COMMODITY SUPER CYCLE?

As precaution to prevent or contain the spreading of COVID-19, most global economies went into lockdown. This resulted in world markets becoming very unpredictable. Warren Buhai, Senior Portfolio Manager at STANLIB Multi-Strategy, addresses the question of whether commodities have entered a new super cycle as a result of the pandemic. He focusses on supply chain bottlenecks, inflationary fears and how decarbonisation efforts and related energy transmission infrastructure changes may trigger super cycle conditions.

Has the pandemic induced a new commodity super cycle?

Since COVID-19-related lockdowns became widespread globally in Q1 2020, bottlenecks have developed in various supply chains, including most commodity markets, to varying degrees. This, together with rising concern around inflationary risks driven by the combination of highly stimulative monetary and fiscal policies working together for the first time since the 1970s, has raised the question whether we have entered a new commodity super cycle.

The high degree of uncertainty around both supply and, more importantly, medium- to longer-term demand for most major commodities, makes it very difficult to conclude with high conviction that we have entered a new commodity super cycle. However, it is clear that the world has reached an inflexion point in combating climate change. Long-term stringent carbon emission reduction targets set by the world’s largest governments will have a material impact on many industries, making it highly probable that certain commodities will experience super cycle conditions over the next decade or two.

This illustrates that a commodity super cycle is likely to need a specific medium-term demand driver that distinguishes it from normal demand growth. Today, we potentially have two key recent developments that could generate a potential super cycle:

Decarbonisation is a potential game changer for some major commodities

Given its excessive carbon emissions, the transition of the energy sector is likely to include:

Inflation risk is highest in decades

A fundamental change was made by the US Federal Reserve last year in the way it tackles its key mandate of price stability and full employment. Changing to average inflation targeting and focusing on the low end of the employment spectrum has effectively changed the way it tries to pre-empt overheating in the US economy. This means that going forward, it will allow the economy and, by design, inflation, to run much hotter than any time since the 1970s.

Global investors concerned about the rising inflation risk often hedge by buying commodities. The chart below clearly shows that commodity investment is currently even higher than the peak reached in the China-driven super cycle. However, relative to the trillions of US dollars of COVID-19 monetary and fiscal stimulus and the size of other risk asset classes, total commodity investment of less than $700 billion is small and could increase materially if inflation risks continue to rise. 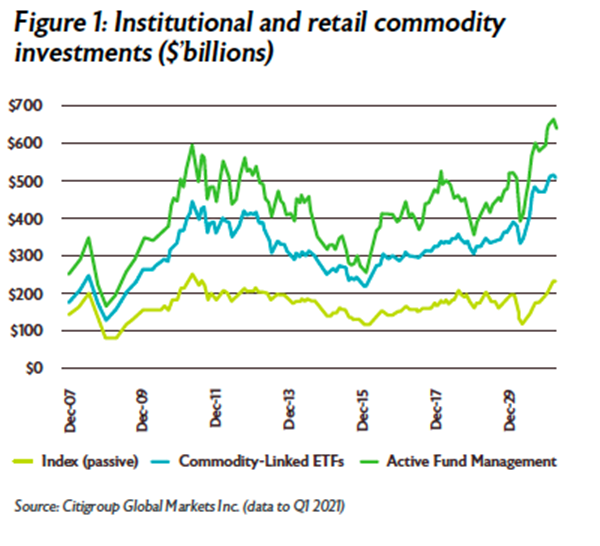 Another important issue related to inflation expectations is their close correlation to the oil price. This is unsurprising, given its direct and indirect impact on most industry supply chain costs. Linked to this, is the question whether new renewable power generation sources and infrastructure can rise at the appropriate rate to replace the falling supply of fossil fuels, like oil and coal. Mismatches in this transition could potentially cause shortages and price spikes in years to come, despite a declining demand profile for fossil fuels. Such energy price spikes are likely to stoke inflation fears, thereby continuing to support hedging demand.

While decarbonisation and average inflation targeting are compelling tailwinds for certain commodities, it is difficult to envisage a broad-based commodity super cycle, because of various long-term headwinds, including:

A potential commodity super cycle generally requires a meaningful and sustainable above-trend growth driver. While the supply chain problems and short-term growth rebound linked to the COVID-19 lockdowns globally have pushed certain prices above marginal costs and some into super cycle territory, these are unlikely to drive a sustainable, longer-term, broad-based commodity super cycle.

We do, however, believe that it is plausible to have ‘super cycles’ in specific commodities that encounter above-trend demand growth conditions. Uncertainties around inflation driven by the continued combination of novel and aggressive monetary and fiscal policies in the US and other major economies, will underpin significant investment demand in commodities. Such tailwinds, together with impending decarbonisation policies in all the world’s major economies, can drive supply deficits in commodities such as copper, lithium, PGMs and perhaps ironically, oil. The extent and persistence of these deficits will depend on government commitment, speed of adoption and continuity of decarbonisation policy initiatives.

This website uses cookies to improve your experience while you navigate through the website. Out of these, the cookies that are categorized as necessary are stored on your browser as they are essential for the working of basic functionalities of the website. We also use third-party cookies that help us analyze and understand how you use this website. These cookies will be stored in your browser only with your consent. You also have the option to opt-out of these cookies. But opting out of some of these cookies may affect your browsing experience.
Necessary Always Enabled
Necessary cookies are absolutely essential for the website to function properly. These cookies ensure basic functionalities and security features of the website, anonymously.
Functional
Functional cookies help to perform certain functionalities like sharing the content of the website on social media platforms, collect feedbacks, and other third-party features.
Performance
Performance cookies are used to understand and analyze the key performance indexes of the website which helps in delivering a better user experience for the visitors.
Analytics
Analytical cookies are used to understand how visitors interact with the website. These cookies help provide information on metrics the number of visitors, bounce rate, traffic source, etc.
Advertisement
Advertisement cookies are used to provide visitors with relevant ads and marketing campaigns. These cookies track visitors across websites and collect information to provide customized ads.
Others
Other uncategorized cookies are those that are being analyzed and have not been classified into a category as yet.
SAVE & ACCEPT